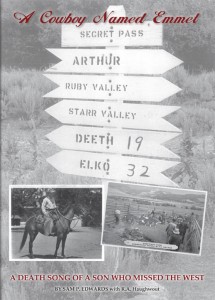 This week will see the return of the Sam Edwards’ father, Emmet, to his old home of Elko, Nevada. Not literally, of course.

But at the world-famous National Cowboy Poetry Gathering, Sam’s new book, A Cowboy Named Emmet pays homage to his father. It will be read at 2 p.m. Tuesday by Harry Madsen at the Great Basin College theatre.

A Cowboy Named Emmet is a book about a cowboy who saw the early to mid-20th century changes that came to the west he loved as the California he was raised in becomes fenced in: and his move to work in Elko, Nevada where there was still the open range life. The book is by his son, written with a bit of rhythm and a lot of doggerel. Sam Edwards lives in the Sierras-not quite in Nevada or the old time ways.