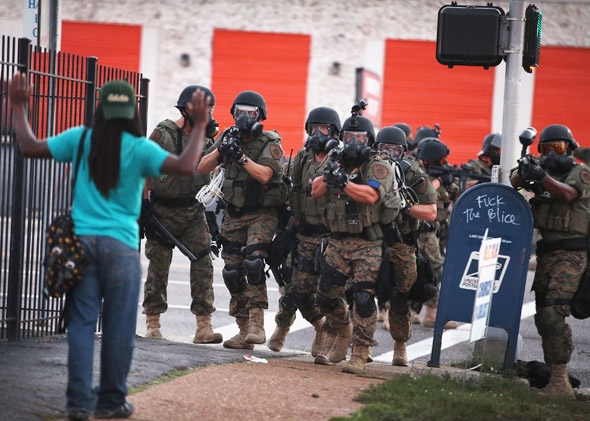 “Don’t run after dark. It doesn’t matter if your little buddies are running or not. Don’t you run. Don’t put your hood up. People will think that you’re hiding your face. Keep your hands visible at all times. If you reach in your pocket, people will assume that you have a weapon.”

A Nation Shocked by Ferguson, Mo.

The rationale behind numerous anti-mask laws on the books is that they aid the police in identifying people and that the anonymity provided by masks gives license to protesters to act violently. Recent events in Ferguson, Mo., raise serious questions about whether we also need similar policies to address anonymity on the side of the police.

A disturbing part of the emerging militarized riot uniforms is the complete disguising of police faces and other identifiers. We can see video of police overreach and even of reporters being arrested, yet have no way of ever holding people responsible for their actions, giving those who would abuse such authority license to do so.

Local governments should be pushed to mandate that riot gear be emblazoned with large and clearly visible identifier numbers. As of now, we have no mechanism for holding individual officers accountable, and that is contributing to the abuses we see unfolding on the streets of Ferguson.

Thoughts of a black mother to a mixed-race child: “Don’t run after dark. It doesn’t matter if your little buddies are running or not. Don’t you run. “Don’t put your hood up. People will think that you’re hiding your face. Keep your hands visible at all times. If you reach in your pocket, people will assume that you have a weapon. Always be scrupulously polite. Yes, sir, ma’am, officer. No, sir, ma’am, officer. He looks at me and asks why. Why must he learn these strange rules that won’t apply until “forever from now”? And I hesitate. How to explain my fear? That six or seven years isn’t forever from now.

A Youth, an Officer and 2 Paths to a Fatal Encounter

Devin Stone, 28, a friend of Mr. Brown’s, was home in his apartment at the time, across the street from the place where the men were confronted by the police. Sitting outside his building, Mr. Stone said he was jolted by the sound of two gunshots, followed by several more in rapid succession. The second series of shots “sounded automatic,” he said. “They let it rip.”

As the nation’s wars abroad wind down, many of the military’s surplus tools of combat have ended up in the hands of state and local law enforcement. Totals below are the minimum number of pieces acquired since 2006 in a selection of categories.

Missouri Unrest Leaves the Right Torn Over Views on Law vs. Order …

Mr. Paul, quoting from research by the libertarian-leaning Cato Institute and the conservative Heritage Foundation, noted the trend of police departments’ buying military-style vehicles and weapons, condemning “the cartoonish imbalance between the equipment some police departments possess and the constituents they serve.” 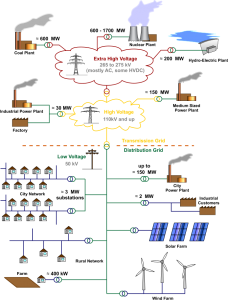 Across the nation, investment funds and major banks are wagering billions on similar trades using computer algorithms and teams of Ph.D.s, as they chase profits in an arcane arena that rarely attracts attention. Congestion occurs when demand for electricity outstrips the immediate supply, sending prices higher as the grid strains to deliver power from distant and often more expensive locations to meet the demand. To help power companies and others offset the higher costs, regional grid operators, which manage the nation’s transmission lines and wholesale power markets, auction off congestion contracts, derivatives linked to thousands of locations on the grid. When electricity prices spike, contract holders collect the difference in prices between points from the grid operators. If the congestion moves in the opposite direction, holders pay the operators.

“I want the government to be representative, elected by us from our hearts, not by the Chinese government,” Mr. Mak said, rapidly taking phone calls about organizing the swelling crowd. Under current electoral laws, the chief executive is selected by a committee dominated by Beijing loyalists. On Saturday, the crowd grew into many thousands, and veered from angry jeering to an almost celebratory mood when the number of police officers thinned. Official agencies offered no estimates of crowd totals.

Crackdown on Protests by Hong Kong Police Draws More to the … 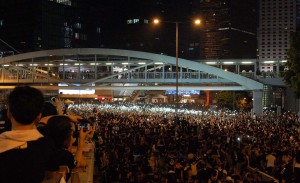 The confrontation threatened to tarnish Hong Kong’s reputation as a safe enclave for commerce, and immediately raised the political cost of Beijing’s unyielding position on electoral change here; footage and photos of unarmed students standing in clouds of tear gas facing off with riot police officers flashed around the world on Sunday. It also set the stage for a prolonged struggle that poses a test for President Xi Jinping of China, who has championed a harsh line against political threats to Communist Party rule. “We’ve never seen anything like this, never imagined it,” said Kevin Chan, a 48-year-old factory manager who joined many thousands of people gathered at night on the road near the government offices. “The government must awaken that this is the Hong Kong people,” he said, gesturing to the crowd, mostly people in their 20s. “These are not their enemies. These are the people.”

Opposition in Syria Is Skeptical of U.S. Airstrikes on ISIS – NYTimes …

But the execution of the strikes has also been criticized, in interviews as well as online, by numerous Syrians bitterly opposed to the Islamic State. These insurgents and opposition activists have pleaded for years for the United States to strike the Syrian government forces that have been bombarding their towns and villages, and they initially welcomed the strikes on the Islamic State as a helpful second best.

Despite U.S. Claims, Yazidis Say Crisis Is Not Over

American officials said that the assessment meant American airstrikes and humanitarian airdrops, along with efforts by Kurdish pesh merga militiamen, were working and “an evacuation mission is far less likely,” in the words of the Pentagon spokesman, Rear Adm. John Kirby, on Wednesday. “It’s not true,” she said.

“If you want to fight the cat, you must bear its scratches,” he said. “If you can’t handle a battle with ISIS, don’t start one.” He said he could not blame fighters for joining ISIS, which rebels said had beheaded a group of rival insurgents in a nearby town. “ISIS fighters didn’t come from Mars,” he said. “Fifty percent of them are from here, Syrians, I know them personally. They left the F.S.A. after what they saw from corrupt commanders. Some of them said, ‘Either we leave or we die!’ ” “Either we stop fighting ISIS or we continue and we become the regime’s ally,” he said, adding, “Goodbye, revolution!”

Resisting Nazis, He Saw Need for Israel. Now He Is Its Critic …

On Thursday, Mr. Zanoli, 91, whose father died in a Nazi camp, went to the Israeli Embassy in The Hague and returned a medal he received honoring him as one of the Righteous Among the Nations — non-Jews honored by Israel for saving Jews during the Holocaust. In an anguished letter to the Israeli ambassador to the Netherlands, he described the terrible price his family had paid for opposing Nazi tyranny.

What We’re Learning About Drug Company Payments to Doctors …

We’ve aggregated information from the websites of some large drug companies, which publish their payments as a condition of settling federal whistle-blower lawsuits alleging improper marketing or kickbacks. Today, in cooperation with the website Pharmashine, we’ve added data for 2013, which now covers 17 drug companies accounting for half of United States drug sales that year. (You can look up your doctor using our easy search tool.)

Deaths Tied to GM Ignition Rise to 23, as Compensation Offers Go Out

Thirty-nine claims have been determined to be eligible for payments from the company. As of last Friday, the program had received 867 claims, including 153 for deaths. Ms. Biros said that the fund had officially rejected about 40 of the total claims. The others were still under review, most of them awaiting more evidence that the faulty ignition switch was a factor in the crash.

Revisiting the Lehman Brothers Bailout That Never Was – NYTimes …

Ben S. Bernanke, the Fed chairman at the time, Henry M. Paulson Jr., the former Treasury Secretary, and Timothy F. Geithner, who was then president of the New York Fed, have all argued that Lehman Brothers was in such a deep hole from its risky real estate investments that Fed did not have the legal authority to rescue it.

Where’s the Justice at Justice?

The Justice Department is trying to scuttle the reporters’ privilege — ignoring the chilling effect that is having on truth emerging in a jittery post-9/11 world prone to egregious government excesses. Attorney General Eric Holder wants to force Risen to testify and reveal the identity of his confidential source on a story he had in his 2006 book concerning a bungled C.I.A. operation during the Clinton administration in which agents might have inadvertently helped Iran develop its nuclear weapon program. The tale made the C.I.A. look silly, which may have been more of a sore point than a threat to national security.