Home » Masters on the Mountain 16

Masters on the Mountain 16

‘Masters on the Mountain 16 is about increased ability through age, personified by ‘Uncle’ Bill de Thouars who only seems to hit harder and move faster the older he gets. This seminar, captured on an edited, 3-DVD set, was about staying on the court and not moving to the sidelines.

”Uncle’ says speed is everything, but Stuart Lauper says only very fast people say that. 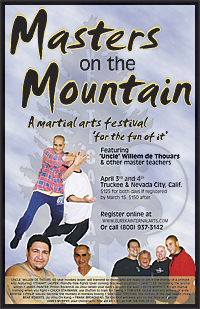 Philip Sialas proved that he could turn himself inside out to adapt to his opponent’s attack during his monkey boxing seminar. Philip, who was a tunnel rat in Vietnam, says that he chooses to be where his opponent is not.

Stuart Lauper took over with his P.M.A. crew for his phenomenal demonstration of martial stamina and grit by taking on all-comers in friendly free-fighting (“overcoming fear with laughter”).

Chuck Stahman proved that even the introductory bow of his Kun Tao Silat, when internalized sufficiently, is a powerful self-defense not prohibited by age.

James Painter , with his Prison Rocknroll Jiu Jitsu, taught what to do when your back’s against the wall. One of his instructors, Santiago Terrases , brought his West Coast contingent of geezer grapplers, who could catch-as-catch-can with the best of them.

Janet Gee proved that by revealing the animal within, spontaneous and graceful movement keep the player young.

Keith Moffett point out that many martial systems, when taken in their entirety, are complete and expect that with time in grade, usual power and efficiency comes.

Frank Broadhead taught some new Tai Chi principles so that martial players could combine what they do with proven principles of movement for longevity. And, of course, Uncle taught some critical self-healing principles.