Grandmaster Willem de Thouars (who resists all such titles, saying there is only one master and that is God) didn’t learn his arts from a lineage of masters descended from some shadowy, mythical personage said to have learned from the animal kingdom. Willem learned his art directly from animals — especially monkeys — in his lifetime. He attributes to the humans he also studied with his wisdom and ethical concerns but he attributes to his animal teachers his "primitivism" and his ability to "become like a tornado without cessation."

But Willem’s ever inquiring mind has led him to realizations about the why of why things work that are ground breaking theories of human energy and what that energy is able to "borrow" from nature.

Many practitioners of the Chinese internal arts have come to practice with Willem in recent years to make their own arts more "practical." They also come because his teachings of human energy are also related to quantum physics — in the way the practitioner is able to alter his or her reality — as well as Chinese five element theories.

Willem is a terrifying practitioner of bladed arts (and carries these principles into his open hand technology of Kun Tao Silat, with its Indonesian blend of bladed fighting with the integration of Chinese Kung Fu).

There are many tai chi and pa kua practioners currently studying with Willem who never dreamt they would be practicing knife "entrances" and counters. His speed and power, his use of the knife as an extension of the body, mobilized by momentum and centrifugal force, seduces them into bladed study.

Then before they know it they are mimicking his "acceleration," which he gets from his realization of the "static electric charge of the universe." Willem attributes his speed to his understanding ("feeling") of this electric charge, from which he borrows in order to accelerate.

As Robert Dreeban has pointed out in the pages of Inside Kung Fu in his excellent article on Willem’s fighting principles, Willem’s Kun Tao and his spinal energy pa kua employ lots of slapping of the body. This is done for reality, conditioning and perhaps most importantly, creating an electrical disturbance. Willem teaches energy principles that rely less on chemical reactions of the body than on the nature of the energy field inhabited by the human form (see Dr. Robert Becker Cross Currents or The Body Electric), much as is taught by such teachers of the energy body as Arthur Goodridge. Willem’s fa jing, or discharge of energy, is followed immediately and continuously by the gathering in of oxygen charged by that release of energy, the harvesting of it.

Preferably the altered or charged air is inhaled, but, it can be taken in by all the centers of the body directly. Thus the circular blocking or paddling of air toward the body prior to the beginning of any of his forms (which, by the way, are marvelously imprecise) is much like breathing the ozone-rich air of mountain ranges where there are frequent lightning storms. In fact, within a fairly short period of practice, this disturbed air smells sweeter than the usual fare. 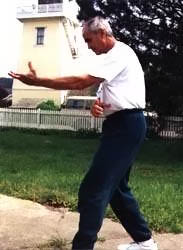 Willem continues this swimming motion to actual slaps of the body (Arthur Goodridge calls this "body drumming"). Besides creating a disturbance for him to accelerate from, he is following in the ancient Chinese lineage of bone marrow tapping (see "Vertical Axis Tai Chi of C.K. Chern" in Inside Kung Fu, March ’97). In terms of traditional Eastern health theory, this practice breaks up stagnant chi.

Willem emphasizes the totally relaxed open palm (wet hand) — particularly in his pa kua and monkey responses. Not only is this a devastating way of releasing the chi in attack but as the healing hand, this is the palm that can generate the most circulation. One of Bruce Jucknik’s associates, explains that part of Willem’s hand trapping is the intention to obstruct the bio-electrical charge of the opponent’s body he demonstrates through muscle-testing techniques of chiropractry.

Willem states "my ‘salad bowl’ consists mostly of the internal means. That is my only excuse in life — all my essence is based on spirit, practical application, love, hard training and understanding. The fighting aspect is very, very little. Energy directed toward building good health is the major concept."

While Willem emphasizes the use of the natural relaxed stance of the upright human figure through the spiraling tornado of his Spinal Energy Pa Kua, his monkey boxing and Penjat Silat reflect his conviction that animals do not operate only at "comfortable" altitudes. Not only are his lower arts effective in avoiding power or taking out the legs of an opponent but his drills like "monkey picks up fruit" (Willem picks up golf balls!) promote the lowering of the chi through soft tissue to the foot. Arts such as Vertical Axis Tai Chi promote the lowering of the chi through the bones, and Spinal Energy Pa Kua continues the process by reconditioning major muscle groups and tendons with chi so that the mind can move easily throughout the entire body.

Willem encourages spontaneous, free movement in his teaching of martial response. He feels the formless arts are very difficult for
practitioners to grasp. They demand a surrender that the usual ego is
reluctant to make.

This natural spontaneous response to attack is enabled by the practice of peripheral vision so that all things are seen as one. Unlike most teachers of the internal martial arts, he is not trying to control the energy. Willem assumes energy is "intelligent" (as Fred Hoyle, the astronomer, used to say about interstellar dust) and the end result of his teachings is surrender to that intelligence. It is as though Willem has plugged into the universe when he expands his awareness upwards (not peripheral vision as it is usually practiced), so that he looks like he has "vampire eyes" (his words). He receives strikes by looking up and away, and he encourages this practice in striking drills.

Willem describes his teaching in three principles "stay simple, stay primitive and use lots of common sense." The practice of those three principles are internal; chi kung, wei kung and nei kung compressed together. You practice a fixed pattern, and that is very good, but you run into the reality of fighting and it is an ever-lasting changing pattern. No technique will be the same because it can’t, and so far as you learn a fixed pattern, in reality it won’t make sense because with fighting nothing is ever fixed.

"I try to work with people so that they have a better understanding of their own art. If you watch a tiger there is nothing set about his reactions, he does exactly what his mind tells him in that moment. If you watch a monkey he is never set, he activates himself from what we would call uncomfortable positions."

One of the most moving aspects about Willem as he cultivates his "backyard" of a long lifetime of martial study is that he truly does it as a "way." He has not dedicated himself to
material acquisition. He still makes his living with his hands during the week.

A few years ago he tried to retire (as a master machinist) after a lifetime of work throughout the world. Just recently he went back to a day job during the week. He teaches weekend martial arts seminars throughout the world to a network of groups who regard him as their "uncle," as well as his dedicated senior students
in the Denver area.

Wherever he has traveled, as a seaman, airline pilot, or skilled laborer, he has studied the people and the martial arts of that place and has incorporated into his own unique martial art at least twelve traditional styles.

He describes how he has made these arts "internal":

"The main source is internal energy. It is driven through:

"Each impulse regulates itself at 72 cycles per minute. All our movements are the capacity of stored energy. By coordinating the skeleton figure through the supportive muscle of the Achilles heels we create appropriate timing. With our structuring our body alignments, in rooting of the centers, we unify heaven and earth with appropriate breathing motions of the stomach muscles into direct energy, or cultivations in modulations of the heart pump, and lungs and it creates exact timing in movements.

"As humans we are limited to placements and displacements. We secure our strength by nourishing appropriate breathing. Appropiate breathing causes us to root ourselves in center positions of the earth. So we practice forms as medicine for our vascularity system, circulatory system, muscularity, skeleton and meridians. Together we are a moving factory of molecules, atoms — from matter into energy. We function in practice and we function in living. Therefore, a smile is a motion of health to lungs and heart."