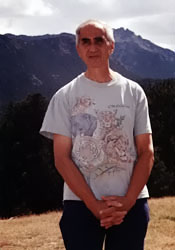 A few of us from the Lake Tahoe
area and from the Mendocino coast (Bear Roberts, Frank Broadhead, Sam
Edwards, Jason Young, and Daniel Hall) travelled in the beginning of
October to Estes Park, Colo. for ‘Uncle’ Willem de Thouars 1998 ‘Family
Gathering.’

I think that in particular this
year of the third ‘gathering’ fulfilled the operative word: family.
This year all the individual seminars were taught by senior students
(all of whom have their own schools and have almost without exception
been with Willem for over 20 years), instead of by invited guest
instructors.

The only exception to this was Don Miller’s tai chi seminar (with Matt
Cohen as helper extrodinaire) but then they are more recently adopted
sons. Don proved the nearly miraculous recuperative effects of breath
controlled Chi Kung (just as Wayne Welsh did with pa kua), especially
in an arena where there was such an extreme expenditure of energy.

I think that was one of the apparrent qualities of this gathering: the
amazing receptivity and openess to other arts, particularly the Chinese
internal, with a tad of Uncle’s spice.

And we who Uncle has given the courage to alter our mother arts in
accordance with his practical "principalities" of energy and
application, found this modification has made us effective enough to be
comfortable with the advanced combative work that he offers. (Even if
Frank and I did end up sucking air after the 3 a.m. hopping horse
stance drill complete with ground strikes — repeatedly down the length
of a football-size gym.)

Don has gone so far as to modify his
Chen Man Cheng Tai Chi to "Monkey Tai Chi," and, while still slow, has
the acceleration of monkey energy. For my part I only do Willem’s small
circle mirror palms Pa Kua now.

With the gathering of
high level players from all over the world to Estes Park, it was
possible to assess your training level!

It was also possible to really ring it up in two person work
(entrances) and off court sparring — edging up on the reality and
impact because of the highly-trained bodies, nice minds and common love
for Uncle Bill.

There were a number of specific ideas that we in our individual ways
brought home to study. For my part, from Wayne Welsh’s pa kua sem inar
— again with energy of monkey — made me aware of the flailing relaxed
strikes of Willem’s mantis (as well as monkey).

Doing Chuck Stahmann and Randall Goodwin’s shi sau drills with pa kua’s
constant changing (traditional single palm change or Uncle’s mirror
palms) it was apparent how effective it was in warding off real
straight ahead power. Yet you could still remain true to the exercise’s
rule of maintaining touch.

With constant turning to avoid power, the tendency to muscle it out and
foreshorten the drill can be avoided and therefore is fantastic
internal speed work

From Phillip Sailas, I as
a very reluctant grappler nevertheless brought home the idea of
sustained cooperative locking and counterlocking; throws and
counter-throws so that Phillip’s high speed and unlikely counters might
at least rub off in slow motion work. The slower tempo lending these to
having internal affect.

At George Morrin’s ‘station’ I realized that for those of us who will
not in this life time get his encyclopedic understanding of the body’s
‘line’ of structure (and how to break it down) — then , the judicious
use of Tai Chi’s ‘popping’ energy to break stance might substitute.
We’re presently investigating this in the Sierras. Thanks George.

And Chuck’s incredible and joyeous speed and power was an inpiration.
And he has assimilated Willem’s non-doctrainareness — if it works and
it’s spontaneous, it’s good. Thanks Chuck and Randall.

To some of us, one of the thrills of being there was what happened off
court. It was amazing to be able to train intensely and combatively
with people with nice minds. It was hard to believe we could get so far
out there with such a sense of fun. To notice just a few such players,
thanks Luiz Pena, Ted Garcia, Joseph Bronson, Steve Todd, Billy White,
George Kelokos, and many more.

How Many Knives is Enough? Willem’s
special guest was Chris Syak, master of knife and escrima who displayed
the most uncanny kniife work that experienced people — I wouldn’t
know! — tell me they have ever seen. I was able to take home only the
more simple fundamentals.

One was carry more than one
projectile so that you never need to resist a disarming attempt. He
demonstrated the power of his ‘flick’ sending a swarm of chopsticks at
Don Miller so that they individually whistled (from 50 feet!). 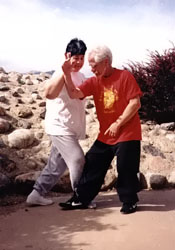 The other fundamental was a two person cooperative knife attack drill,
instigating and parrying repeated cuts and slashes from the inside of
the attack with the outside of the opposite arm (the bony side) to
prevent the follow through cut.

Among the other gifts of
this gathering was Willem inspiring us to have a form — for its
expression as well as its unique and traditional conditioning qualities
— that we make our own. Those who have already done so will be on the
video Roger Brockman made of the entire event — with professional
lighting no less!

That Saturday night Willem picked from among his family — those not
hiding in the restrooms — to show off their forms. To my amazement all
were able to perform with composure.

Don did monkey
tai chi, and our own Frank Broadhead did an obscure and beautiful Yang
lineage form. They and many others whose names I don’t know convinced
me I needed to invest in form work.

We were all brought in from, and returned to the airport, as you would expect from family. (Thanks Roger and Kathleen).

There was also that wonderfully wild quality you would expect from the
gatherings — walking into the de Thouar’s house after arrival and
finding Joyce teaching the contingent from Mexico to Hula.

Then, coaching Frank through a two person takedown set with George
Morrin urging them to go for it there in the living room. Meanwhile,
Don was taking on all comers in the dining room with people standing
around to protect the glass.

It is perhaps the most amazing martial event in the country. Don’t miss out next year.