Masters on the Mountain 10

Playing martial arts ‘for the fun of it’ 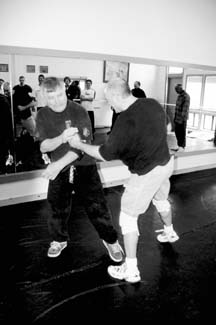 UNCLE DID IT THIS TIME. He always does it but this time he truly did it big time. Some of the best players/ teachers in the country who also love and defer to Uncle came to the Sierras and offered their teachings.

I think, as always, it was the spirit of fun and the mutual respect that Willem inspires; in addition, however, this time it was that those qualities endured as the intensity went over the top.

I think that what Stewart proved, acting as proxy for Uncle in getting people’s chests wet (banging, fighting), was that sense of humor and lack of self seriousness can take you all the way. Most of us presume that there is an unconscious reserve (courage, animal instincts and ferocity) that set some people apart. There is the presumption that if you push their buttons too hard they can, and will, go into a killing-machine mode. In a sense their repressed anger is their secret weapon.

Stewart came to prove Uncle’s humanity, which is sometimes misunderstood–there always being those who mistake kindness for weakness (“those monkey slaps can’t hurt that much”).

By being amazingly conscious (not always a description of martial artists), Stewart is able to step up to other players and exchange blows while making fun of himself in running commentary, in the midst of battle, often while the other player is trying his best to take Stewart’s head off. And then he and David Ayres will do the same with the next person and the one after while the others are still in recovery from the intensity of the effort. And all this under the guidelines: “There are only two rules. The first is there are no rules; the second is you can’t change the first rule.”

And yet Stewart led us in “impact-generated push hands” with the admonition: “Don’t confuse this with fighting. It’s play. Rigorous martial play, but play.” To others it was fighting.

André KnustGraichen represented Uncle by proving that the conscious meditative movements of the internal part of Willem’s “backyard” are what give the body the ability to not only be guided by energy but also absorb or deflect outside power. 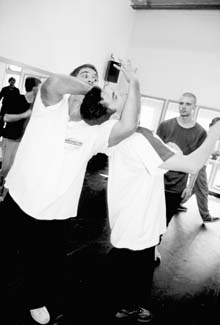 Chuck Stahmann, who has trained with Uncle for a quarter century, always exemplifies the joy that comes from merging with movement. He puts every ounce of himself into his kun tao silat forms, exemplifying the best part of the external martial arts. He approaches two-person work with the gusto and seemingly out of context friendliness of a terrifyingly overgrown child. However there is something about Uncle’s system and Chuck’s conscious choices of where to put his mind that has given him the internal qualities of “root,” and even amidst the ferocity of his movement, an aware touch.

Really, I think the truth for all of these players is that they have learned that sense of humor and humility are the result of internal practice.

Luz Peña, from Reynosa, Mexico, makes kun tao beautiful and precise, while, for some of us, the only avenue to a little bit of power is from Uncle’s monkey background where sloppiness and uncontrolled movement are more of a virtue. Luz makes it look beautiful as well as powerful and it’s important that someone do that.

During the first day of training Bear Roberts from the California Coast wound everybody down with chi kung and jiu jitsu rolls.

Uncle’s contribution–other then the amazing players he has produced and those he is radically influencing from all kinds of disparate arts right now–is the ease of controlling power: his and others’.

The opposite poles he manifests is ever astounding. At one minute, at 65, he is hopping making scary noises and leaping on his opponent with the exact intensity of a monkey, and the next he is massaging out injury with impossibly gentle hands. 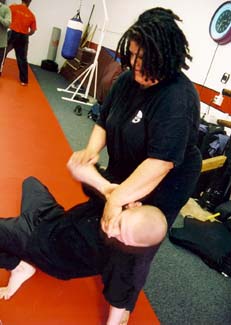 That night everybody camped at Edwards’ retreat on the top of the mountain. Stewart, David and Gil Montoya brought to the potluck a cake embedded with full bottles of Excedrin. The second day as usual was held on top of the mountain (the first day was in Grass Valley in the California foothills).

On this day James Painter from Reno taught a section showing his brutal (but completely controlled) prison rock’n’roll submission jiu jitsu. The great thing about James’ work is that he does not accept much of the jiu jitsu premise that you’re going immediately to the ground. He, like Uncle, puts his big investment in the entrance. Not only is he not submitting to the first football tackle/wrestler takedown, but when he does take down his opponent, he, again like Uncle, is torturing all the way.

Uncle presented his astounding backyard of high-low scissors action blended into an explosive mix of monkey energy and misdirection using the opponent’s direction and power against themselves with improbably minute deflections.

André KnustGraichen showed the vertical axis of traditional silat as it rotates force off its intended line. The short components he taught of full-length forms were wonderfully like tai chi and very beautiful and useful encyclopedias. He also had us accept the fact that when involved with knife play we’d probably find out we’re involved in this play after we’ve been stuck. So the jurus and lankas are the traditional explanation of how to deal with the potential catastrophe of having a knife stuck in you. The first lesson they teach is to leave it there. I haven’t a clue about all this, but I’m hoping André will guide me. I’m more like Stewart Lauper, who says, “If someone draws a knife on you, run away, get your car, get a gun, shoot him and then drive over him to make sure.”

Stewart gave one of the member’s, whose birthday was on this day, April 1, an Indonesian birthday party (in which everybody had to participate) called the “mercy exercise.” This is the manifestation of Stewart’s iron shirt training. He presumed everyone of certain level of experience, so we picked a partner and exchanged power punches two per turn to the midriff, including the solar plexus. We went until one partner after another abruptly folded–will power does absolutely no good in this exercise–or asked for ‘mercy’ and retreated to the rear wall. We went until there were only two left, and of course Stewart was one of them.

Uncle, through Stewart, was proving several points: As sense of humor always triumphs over willfulness. He also used this as an opportunity to enforce integrity and respect.

When Uncle closed the seminar down, he did it by providing a platform to allow his seniors to show they had as Uncle puts it, the “um-pah-pah,” and he just adds the refinement of angles, acceleration and non-stoppingness. I think one of the amazing accomplishments of Willem is that he is doing many of the things other people theorize about. He produces martial artists who come out of themselves and any addiction to fighting, who get better with experience and age and don’t take themselves to seriously. What a gift he constantly gives us!